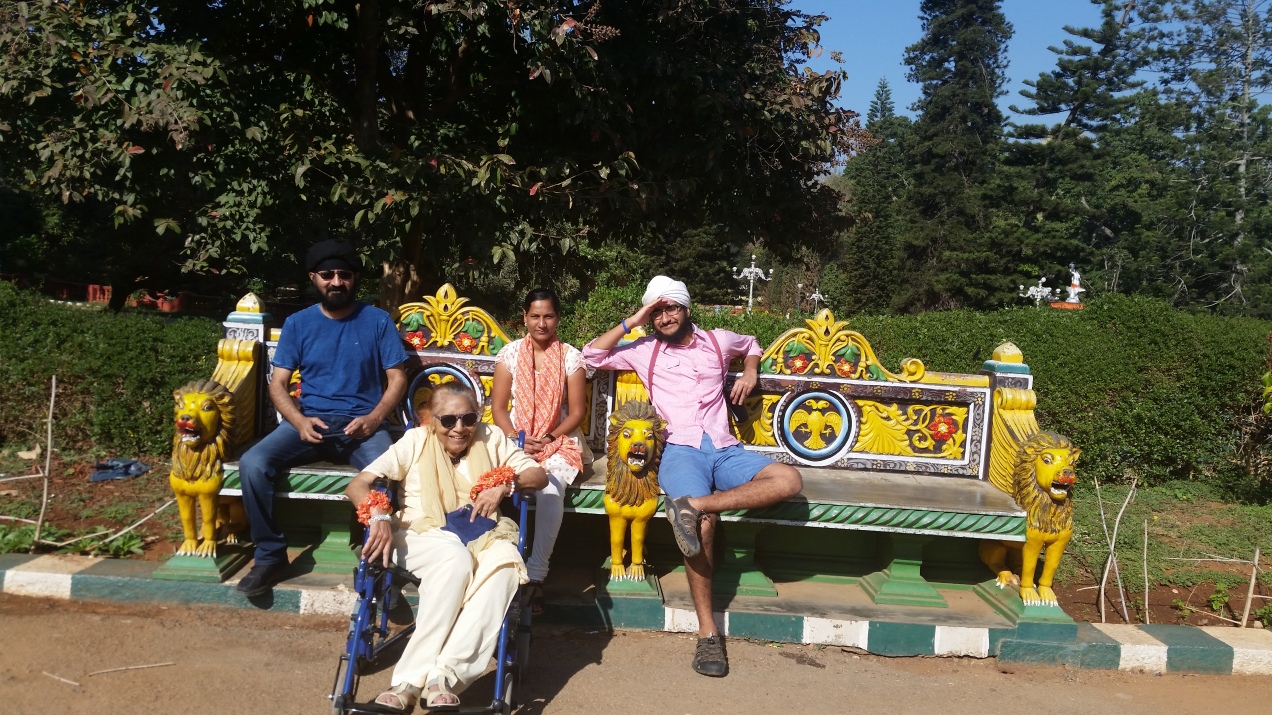 A rare picture of my brother with me and my mother

It has been a whole year, since she has been gone; I feel a strange sense of calmness today. Isn’t she the one who had told me Shraddhs [ritual performed to pay homage to one’s dead parents] are not required, the essential thing is to remember our Creator, the Creator of this beautiful universe at all times. Mummy did her hair in a neat French roll everyday, for as long as she could; she loved wearing silk saris and her favorite brooch for special occasions. And yet she was the one that taught me, that a festive celebration was more about the message and the essence of the teaching rather than the rituals and new clothes.

Mummy taught me to stand up for myself, speak up when things were wrong it could be something as small as returning a stale bun ( that should have been fresh), to a bakery or something as big as confronting a teacher who had made a snide remark about Sikhism (our religion). She encouraged my participation in speech-debate contests. She taught me to excel in studies, just like she had many years ago. She had fought hard at home, to study, to become a certified teacher, only to set her dreams aside for us. An accomplished teacher, who had worked at a government run school, a few hours away from Delhi. My mother really cherished her job, even though, getting there was time consuming and unpredictable, usually two bus rides, followed by a tonga( horse cart) ride or a tempo ride. Her hindi was impeccable, she tried to make mine impeccable too, but I managed to dodge her efforts. So, of course studies were a priority, had it not been for her and my father, would I have studied Computer engineering?

It is mind boggling to imagine, how she fitted all the things she did in 24 hours, her day starting with yoga and a morning walk, followed by breakfast for everybody at home, with everybody leaving at different times, she still made sure everyone got their fresh off -the-griddle Parontha (flat bread) right that very second. Often everybody got their favorite breakfast. My brother almost always got his favorite Alu Parontha ( potato filled flat bread), even if the rest of us got Mooli Parontha( radish stuffed flat bread).

I remember a time, as a nine-year-old when I had frequent headaches, she pounded poppy and fennel seeds in a huge mortar made of heavy stone with a three foot long wooden log, which functioned as a pestle, before roasting them in ghee and sugar for my morning breakfast. It was a cure for my headaches, and no amount of my complaining about its taste or texture could deter her from making it. Here papa would be looking at it with gleaming eyes to lap it up. After all anything with ghee and sugar had to be his favorite!!!

Lunch was already packed. I remember a time when all of us took different lunches, the standard roti-sabzi (flat bread and bland veggies) for Papa, sandwiches for my brother and daal-rice for me. She never complained about it, she just did it! And when did she find time to read the newspaper and magazines? I never knew,  but she did, she liked staying in touch with the current news and had strong opinions on politicians and politics. Every evening, when I came home, I could smell the cake or cookies, the moment I started climbing the stairs to our house.

Mummy’s curiosity always led her to try new recipes, another favorite thing of hers…Well! We had a stone grinder embedded on the counter top in the kitchen, and she was going to use it, even if it meant learning a whole different way of cooking from her Tamilian neighbor. I remember watching her spend easily an hour, grinding the soaked daal and rice for idli-dosa( steamed dumplings and crepes) and the coconut chutney.

She joined many baking classes to learn how to bake,  one time she learned how to bake doughnuts, puffs and potato filled buns. Although, she must have made them only twice or thrice. “They require too much oil, that can’t be healthy”, she had said. Her cooking process was always mindful, less oil, more ginger. Don’t fry the garlic and ginger to death! They will lose their nutrients, just let them steam with the daal or sabzi(veggies). I don’t know anybody else who can cook that fast, even before I could say, “ Iam hungry!” There would be food on the table.

Dinner was always ready on time; she usually had me helping her with setting the food on the table, getting the rotis on the table and then clearing up the table. Whenever, I made fresh off-griddle roti for her, she was in heaven. Then we all sat down for Rehiraas, our nightly prayer, she knew all the prayers by-heart, we joined in a little bit here and there. The understanding of how temporary everything was in this world, except Waheguru/God/Creator/Protector, has had a profound impact on my life. Followed by the nightly routine, that I usually helped my mother with – of changing the bed sheets for the night, laying out the blankets and putting on the mosquito nets every night, for all the beds.

Mummy always had a sewing project at hand, not only did she sew all our clothes, our school uniforms, nightgowns, papa’s pajamas and her own clothes. She also sewed all the curtains, cushion covers, sofa coverlets, coverlets for the seats in the car and the quilt covers (that were routinely removed for a wash). Every winter she would hand-knit sweaters for all of us. When she wasn’t sewing she would turn to crafting. She once made a doll out of yellow colored yarn, modeled after one, that she had seen in her friend’s house, somehow I found it scary and it wasn’t long before my brother picked up on that and used it to scare me. I even had nightmares of that yellow woolen doll chasing me down the street. I guess, the dolls big black bulging eyes made it look scary to me. Learning new crafts were always on her bucket list and they found their way on the walls of the living room or shelves of the little curio case, just like the  blue nailed peacock, green hanging basket and colored paper flowers.

Even though she could drive the car, she would only drive, if it made economical sense, if she could take a bus instead, then that is what she did! My mother would often take a bus ( an hour long ride) to Lalbagh (botanical gardens) to learn new things like flower arrangement, making fruit juices, tomato sauces and cakes. Her course in Ikebana-flower arrangement went on for many months, she had gotten into the habit of collecting random exotic looking twigs and shrubs while going on her morning walks, “ Ah! They will look nice in my arrangements.” She had flower arrangements tucked in every corner of the living room for many years. There were vases of all possible geometric shapes, that were shunted in and out depending upon the arrangement. During, the grand finale of the Ikebana course, Mummy’s simple Ikebana of three Gladiolus flower bulbs arranged at 60- 90- 120 degrees with a palm frond in the background won a second place prize in that category.

And yet, she found time to socialize with neighbors and friends, often knitting while chatting. It was the 70s and early 80s; a time when TV hadn’t made an appearance as yet, family friends still showed up at each other’s houses unannounced, it was common to have people show up on any random day just for a visit. The women would invariably land up in the kitchen making Chai and pakora, something to nibble on for everybody. They enjoyed their private little chat away from the men.

Since, my father worked for Mecon (an engineering firm that was spread all over India), we had visitors from different states of India. They spoke different languages such as Punjabi, Bengali, Marathi, Gujrati, Tamil, Telegu, Konkani  among many others languages. Most of them managed to speak Hindi (national language) or English, albeit with a different accent and it was interesting for me to listen to their “own languages”, when they talked with each other or to their kids. The annual “official” parties were arranged by all the women folk.

Now, these women felt honored, when they were addressed by their husband’s last names such as Mrs Handyal. Mrs Bangale, Mrs Batra, Mrs Sinha, Mrs Saran, my mother loved being called Mrs Sohan Singh, nobody even knew her actual name. I always had a feeling that she wasn’t fond of her name, Kartar, only her sisters were allowed to address her by her name.

Often my father would bring a colleague or two or more, visiting from out-of-town home for dinner, for a special dinner. My mother never failed him; how on earth did she have time to make crispy, yummy, stuffed peppers with the caps sewed on with needle and thread was a mystery to me! Or for that matter crispy okra and brinjals/eggplants stuffed with spices. Everything was done precisely on time. And then, I was often amazed at how efficiently she transformed the leftovers if there were any, to make it always seem like fresh food for us the next day. Especially considering my father’s disdain for them. Left over daal became paronte ( crispy flat bread) for breakfast the next morning, aloo (potatoes) became cutlets and veggies became kofte (veggie balls). Spoilt milk was turned into paneer ( homemade cheese) . She never threw the whey away, it has protein I learned early on so it found its way into the daal or Rajma(beans) or whatever was the dish of the day.

Nothing was ever wasted, I was always asked to remember how hard the farmer works, how much effort goes in gathering each and every grain. “Have respect for your food”, was her mantra! When we hosted the Asa-di-vaar (morning prayers), 60 – 70 people would show up and mummy made all the food with just one pressure cooker and two kadhais (woks), how she juggled that around to make so many dishes was remarkable. And how she managed to extract work out of me was another miracle in itself.

Mummy loved her goggles and picnics

4 thoughts on “Rays of the sun merge with the sun”