“I have a something for you, I hope you like it”, she said with a bright smile, as she handed me a red packet. Dodie, my son’s piano teacher and a friend looked so happy. Her eyes sparkled with joy, truly the joy of giving is in a league of it’s own. And I couldn’t wait to open it. It was a kitchen towel with some beautiful hand embroidery. “ I love it!” I said, giving her a hug. She was delighted but her quiet expression, implicitly told me “I hope you are not exaggerating, it is only a kitchen towel.” So I reiterated how much I liked it as it took me right back to my childhood.

When I as a nine-year-old skipped to the store to buy embroidery threads. I had to choose from a spectrum of bright, vivid colors that the shop keeper laid out in front of me. Each colored bunch cost 35 paisa and I had to be careful on how I spent the few rupees that I held in my hand. Could I pick only the basic red and green, that I almost always needed or could I splurge a little? It was one of the only things that I actually chose, other than which bus I took to school, and that would be a whole another story on how complicated that was.

Otherwise, when I was sent to the bakery or the grocery store it was always with specific instructions on what to buy and how much. “Make sure it is fresh”, my mother would always say. I remember being sent back to the bakery to return stale cookies (butter biscuits as they were called). It was embarrassing! Let alone taking them back, the baker refused to even acknowledge his butter biscuits could ever be stale. He completely ignored my presence, as he moved on to other customers. I quietly left them on the counter and went home. Needless to say, my mother was not pleased with my “lack of courage.”

Every summer, Mummy would have an embroidery project waiting for me. The first one, that I can remember was – making little handkerchiefs that I had to tack and hem before embroidering a little flower in chain stitch, the stalk in stem stitch and the leaves in satin stitch. The next summer, it was time for simple cross-stitch patterns on a couple magenta colored napkins. Mummy and me would sit together, going through her precious book of cross-stitch patterns and decide on one, mostly based on the level of complexity. The next project was cross-stitch patterns, more complex (this time) on the sofa cushions. The pale yellow tablecloth on the coffee table had a vase full of colorful flowers embroidered on it, a pattern we had both really liked. She never got over a missing tablecloth that had some intricate beadwork and colorful bunnies hopping around in aprons, that I had made for a handwork class in fifth grade. Ms Kumar, the teacher never returned it, even after grading it. “She must have spread it on her table in her house”, my mother would say, “it was so beautiful!” It continued to bother her, while I happily learned how to knit socks and crochet little squares under her guidance.

Then one year, Mummy and me decided that we would splurge and spend my prize money that I had earned as a merit scholar in seventh grade on, embroidery books, Precious 50 rupees were spent on two books with “patchwork patterns”. Soon enough the showcase in the living room was filled with my amateurish patchwork. Her favorite one was a scenery of sorts, a patchwork bear and Snoopy sitting under a fake patchwork tree with a bird perched on it, while a castle filled with different shades of blue satin stitch stood at the other corner on a meadow surrounded with bullion stitch flowers of various hues. It was put on display right next to her precious craft work a rather scary woolen doll, and a lone Dahlia made out of crepe paper and felt.

As I got older, I never felt the need for needlework. Now, thanks to Dodie, I have started embroidering kitchen towels. Although, the one she gave me, appears to have disappeared. It feels so relaxing, like I am a ten-year-old again, sitting on my favorite bamboo cane chair in the balcony and rocking back and forth, It takes me home. I can see my mother sitting and reading the newspaper, looking at my embroidered work approvingly with a smile, which has always been rather rare. As a child, there were very few things I did right, and this was one of them. I feel that connection to her and it feels beautiful, so I keep embroidering to keep that connection with her. It is precious, especially now, when it is hard to understand her or even have a proper conversation with her, as she sometimes struggles to form words that once tumbled out of her mouth with ease. 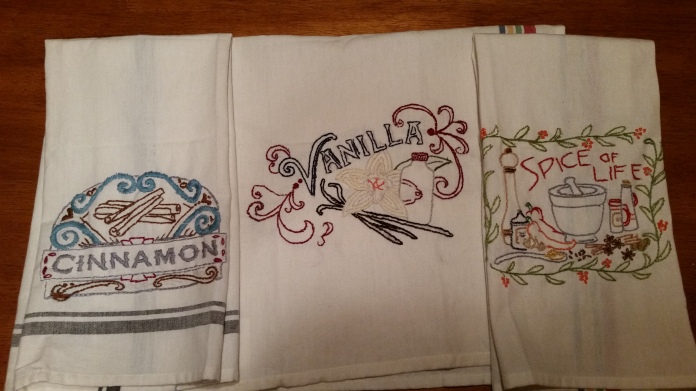 One thought on “Embroidery”

Learning to tell the Truth of and to one's own Soul.

I Don't Have The Map